Search ads may be relevant to a user’s query and can be regarded as a result type. However, the problem with this form of advertisements is that many users cannot necessarily distinguish between these and the so-called organic results, i.e., results that are shown without the search engine company being paid for.

Search ads can be relevant to user search queries, as they are shown in response to queries.

Many users cannot distinguish between ads and the organic results.

Users click on ads assuming these are organic, i.e., not paid for, results.

Understanding commercial influences on what users see in search engines.

We address the question of how contextual advertisements influence information seeking by a combination of methods: We conducted a survey using a representative sample of the German online population in which we asked questions about users' understanding of advertisements in Google (e.g., whether they know how Google generates the most significant part of its revenues, how one can distinguish ads from organic results) and combined that with tasks where participants had to mark ads or organic results on SERPs they were shown. Furthermore, in an experimental setting, we divided participants into two groups. Both groups were shown the same search results, but in one group, the top two results were labelled as ads, whereas in the other group, there were only organic results.

We found that most users are not knowledgeable of Google's business model and cannot identify ads on SERPs. In the experiments, those users not knowledgeable of ads click the first-shown ad more than twice as often as other users. This means that these ad clicks are not informed decisions, but users select them expecting to click on an organic result.

In an eye-tracking study, we confirmed the study's results and added evidence that users with little knowledge of ads are less willing to scroll down to the organic results and that ads receive significantly more visual attention when displayed on small screens (e.g., smartphones) than on large ones (e.g., desktop PCs). 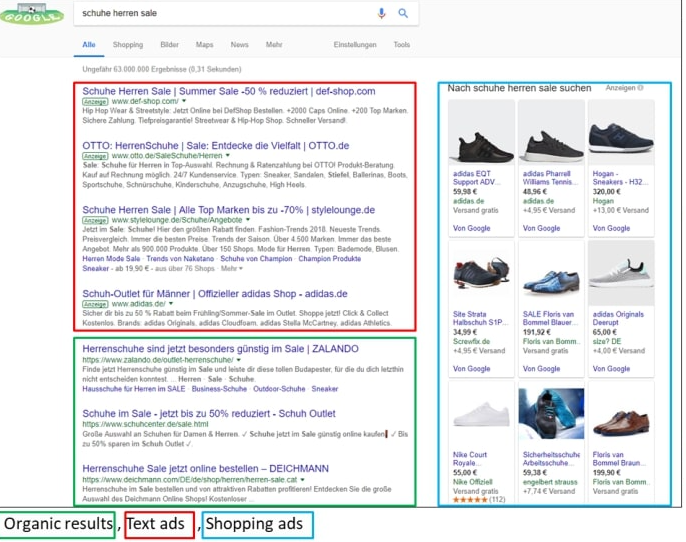